A friend was recently in line at his favorite bagel store and witnessed a scene that has become all too familiar: an adult having a meltdown. When the manager asked the customers to move the line so it didn’t block the entrance, one customer erupted in fury. Apparently, he didn’t appreciate being told where to stand. He began swearing loudly, berating the manager and insulting other customers for acting like “stupid sheep.” He stormed off, alas, without a bagel.

The stories keep coming about people acting out in stores, on planes, at restaurants, and even among friends and family. Everyday annoyances are met with outsized indignation these days. Tales of rudeness, carelessness, and anger abound. As Olga Khazan recently observed in The Atlantic, “everyone is acting so weird.”

It seems that angry and belligerent people are everywhere. Stress, isolation, and increased alcohol use are all likely contributors to this enraged state of affairs. Hopefully these incidents will die down as the pandemic loosens its grip. In the meantime, here are 4 1/2 strategies to cool off a meltdown.

1. Whatever you do, don’t tell the person to calm down.

Anger typically arises when someone feels threatened or out of control. Suggesting that they simmer down or chill out conveys that you don’t care or you don’t understand why they’re upset. Keep in mind that people typically get angry for legitimate reasons—they feel threatened, disrespected, wronged or treated unfairly. The emotion itself may be justified but how they express it may not be.

Instead of rolling your eyes or dismissing the person’s feelings, Dr. Ryan Martin, professor of psychology at the University of Wisconsin-Green Bay, suggests hearing them out. Genuine listening can tame a tantrum. Expressing empathy can defuse a flare-up. Show the person you get where they are coming from: “I would be really annoyed too” lets them know that you identify with their frustration.

Interestingly, for any business owners out there, there is evidence that customers who experience a problem with a product ending up feeling more loyalty to the company than those who don’t have any issues if—and this is a big if—they feel heard and respected. This is known as the “service recovery paradox.”

Business aside, treating people with respect gives them the chance to recover their dignity, regain composure, and recalibrate.

Emotions are contagious. If someone smiles at you, you smile back at them. When someone barks at you, barking back comes naturally. A foul mood can pass like wildfire from one person to another. As tempting as it is to meet an outburst with an outburst of your own, taking the high road is a better strategy. “People tend to match each other’s volumes, pace, and general tone, so instead of meeting the angry person where he or she is at—and escalating the situation—try to de-escalate the situation by subtly encouraging them to lower their voice” says Dr. Martin.

Along these lines, resist the impulse to insult or attack the person. Asking “What’s wrong with you?” is like pouring gasoline on a fire. Similarly, blanket statements that criticize the other person’s character, such as “Why do you always do this?” or “Here we go again…” will further fan the flames. Stay in the moment. Be as specific as you can. Avoid “why” questions—they invite defensiveness—and instead, focus on ways to help the person feel more in control. Be solution oriented to facilitate a shift from negative feelings to positive action.

Research published in the Journal of Experimental Psychology suggests that we have more control over how we respond to angry people than we might realize. According to the study’s findings, if our intention is to stay calm, we are relatively unfazed by angry people but if our intention is to get angry, then we are highly influenced by angry people. Their research challenges the idea that our responses are automatic or passive. If you don’t want your feathers ruffled, make the decision to be unflappable. Emotional contagion is real but not destiny.

Contrary to the message popular movies, news segments, and articles send about anger management, there is zero evidence that venting anger is helpful. Screaming at the top of your lungs into a dark winter’s night as a group of Boston moms did last year is unlikely to dial down frustration. Punching a pillow won’t “release” fury. In fact, research suggests that the opposite is true: blowing off steam makes us even hotter around the collar: 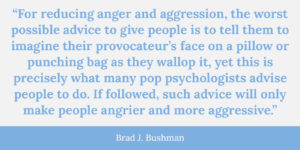 Put simply, angry behavior begets angry behavior. Screaming into a pillow makes it more likely you will scream at another human being. If you spend time with someone who is prone to meltdowns, discourage unproven anger management techniques that encourage simulations of anger and aggression. Breathing exercises, mindfulness, and cognitive based strategies are far more effective.

If you feel threatened in any way, extract yourself from the situation. There is no reason to ever be someone else’s punching bag. Saying something along the lines of “Let’s discuss this later” or “I think we will have a more productive conversation tomorrow” gives you and the person an out. As the old saying goes, just because someone is angry doesn’t mean they have the right to be cruel. EVER.

There is little research behind this (hence the half point) but I thought it deserved a mention. The Grey Rock method involves responding to the other person in a factual but limited and unemotional way, such as using one word answers and communicating with minimal interaction. Behaving like a grey rock when someone is having a meltdown may help keep your cool and help them chill out.

Anger is never a comfortable emotion—in ourselves or in others. How we respond to it can make the situation better, as a recent article in the Wall Street Journal highlighted: 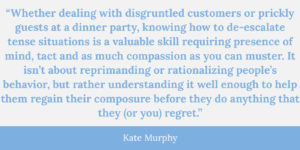 Source: Kate Murphy / The Wall Street Journal
Bottom line: Anger may be in the air but we don’t have to breathe it in.